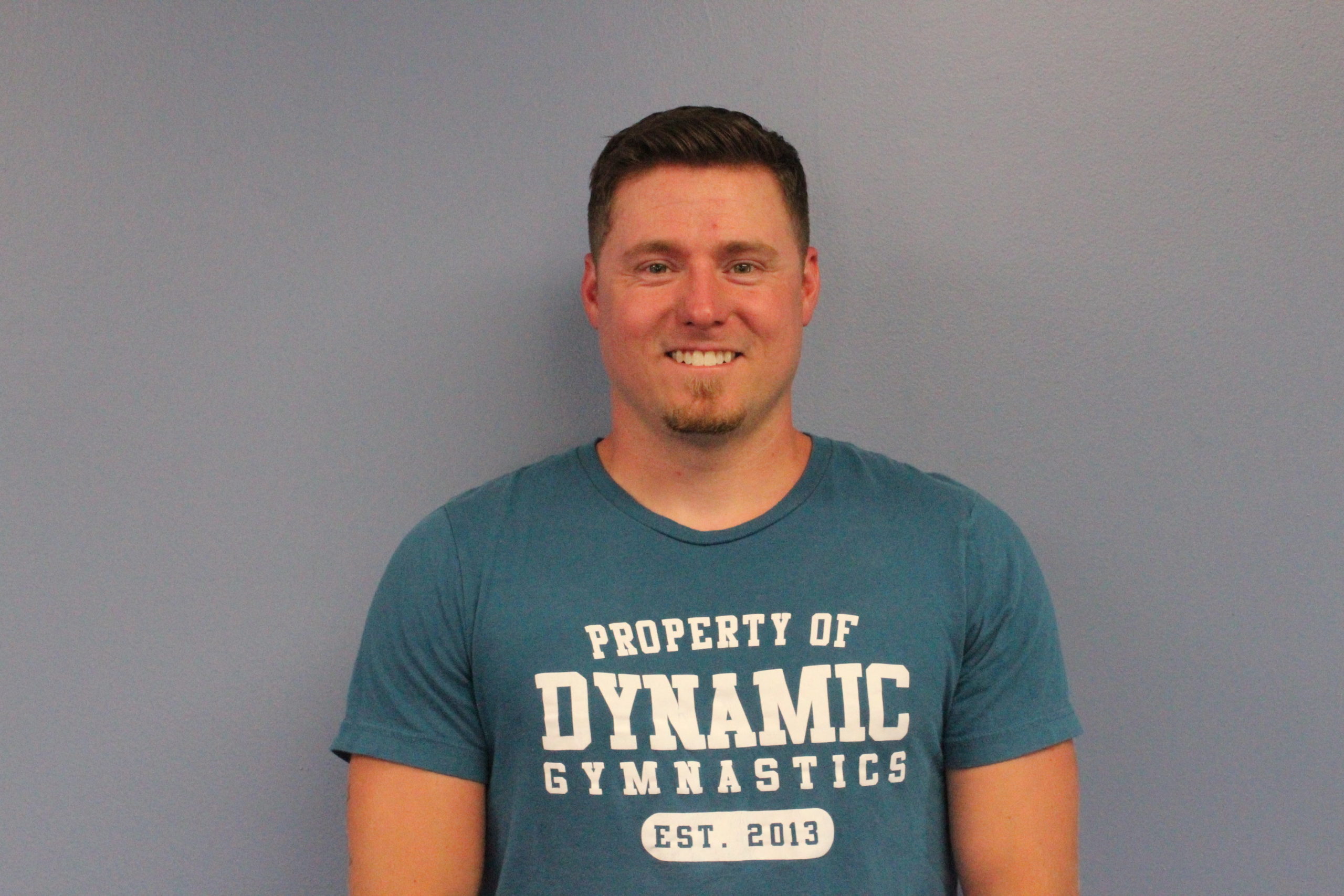 A little about Brandon

Brandon started in gymnastics at the age of 12 at Lynchburg Academy. In his first year of competing, he won his first national title in tumbling, igniting his passion for the sport. Brandon quickly moved up in levels competing as a Sr. Elite athlete and was named to the USA  Senior National Team. He represented the USA in many international meets including two World Championships. Brandon has been coaching for over 12 years. He was the Assistant Coach to the National Tumbling Coach at Capital Gymnastics National Training Center for 6 years. He has coached several State, Regional, and National Champions as well as US National Team members.  Brandon also serves on the Virginia USAG Board of Directors as the Coaches Representative and previously served as the Athlete Representative for many years.  As a USAG Professional Member, Brandon was also a Cat. 1 T&T Judge, is safety certified, and a certified personal trainer with ACSM. Brandon graduated from Marymount University with a B.S. in Health Sciences where he studied Physical Therapy. 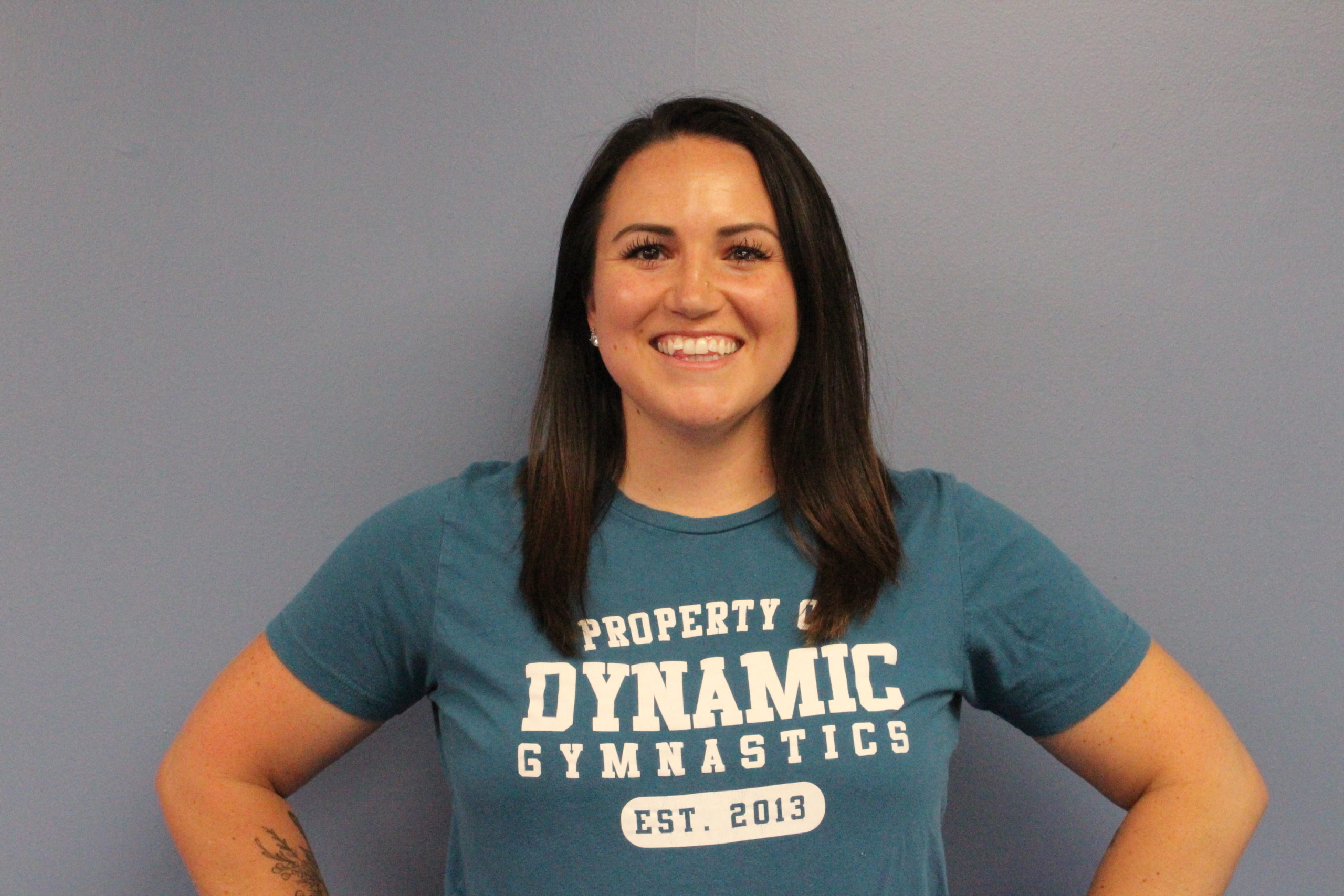 A little about Samantha

Samantha began gymnastics at age four and quickly fell in love with the sport. She competed through Level 9 and trained through Level 10 for Capital Gymnastics National Training Center under the USA National Team Coach. Shortly after that, Samantha found a new passion: coaching. She has been coaching both recreational and competitive gymnastics since 2008. Samantha is a USAG Professional Member and is safety certified. She truly enjoys sharing her love of gymnastics with young and energetic athletes. Samantha graduated from George Mason University with a B.S. in Tourism and Events Management. 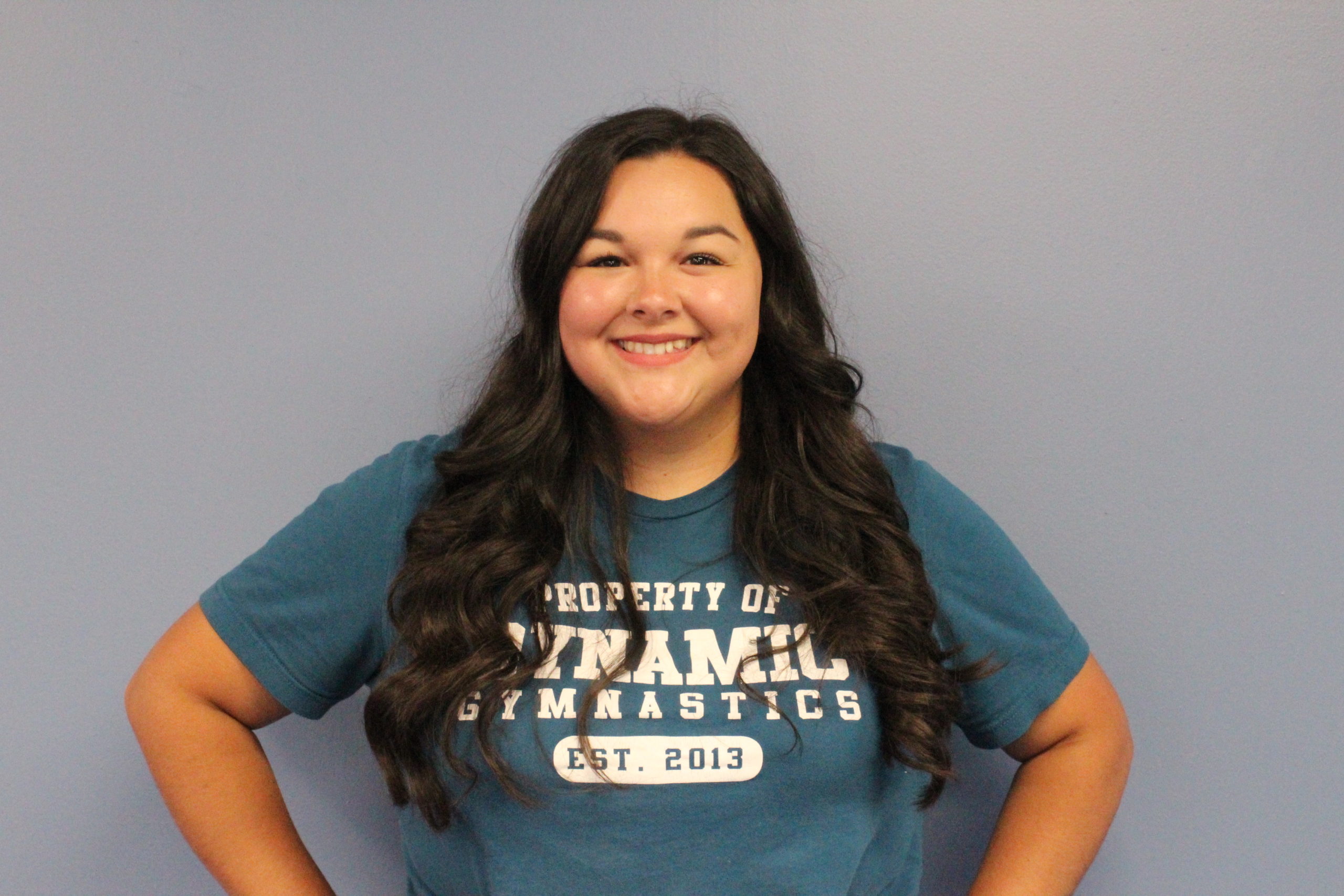 A little about Anna

Anna started her gymnastics career at five years of age, training at Byers Gymnastics in Northern California. She competed as a J.O. gymnast for seven years and competed through Level 8 and training Level 9 until a spinal injury prevented her from continuing. Anna took her love for gymnastics from competing to coaching. She loves working with children of all ages, watching them have fun learning different skills and techniques. She also teaches her students that hard work and determination will help them in every area of their life. Anna is loved by her students and is an asset to the Dynamic program. She is a graduate from Liberty University with a B.S. in Business Marketing Analytics & Design. Anna has been coaching at Dynamic for 6 years and has her USAG Professional Membership and Safety Certification. 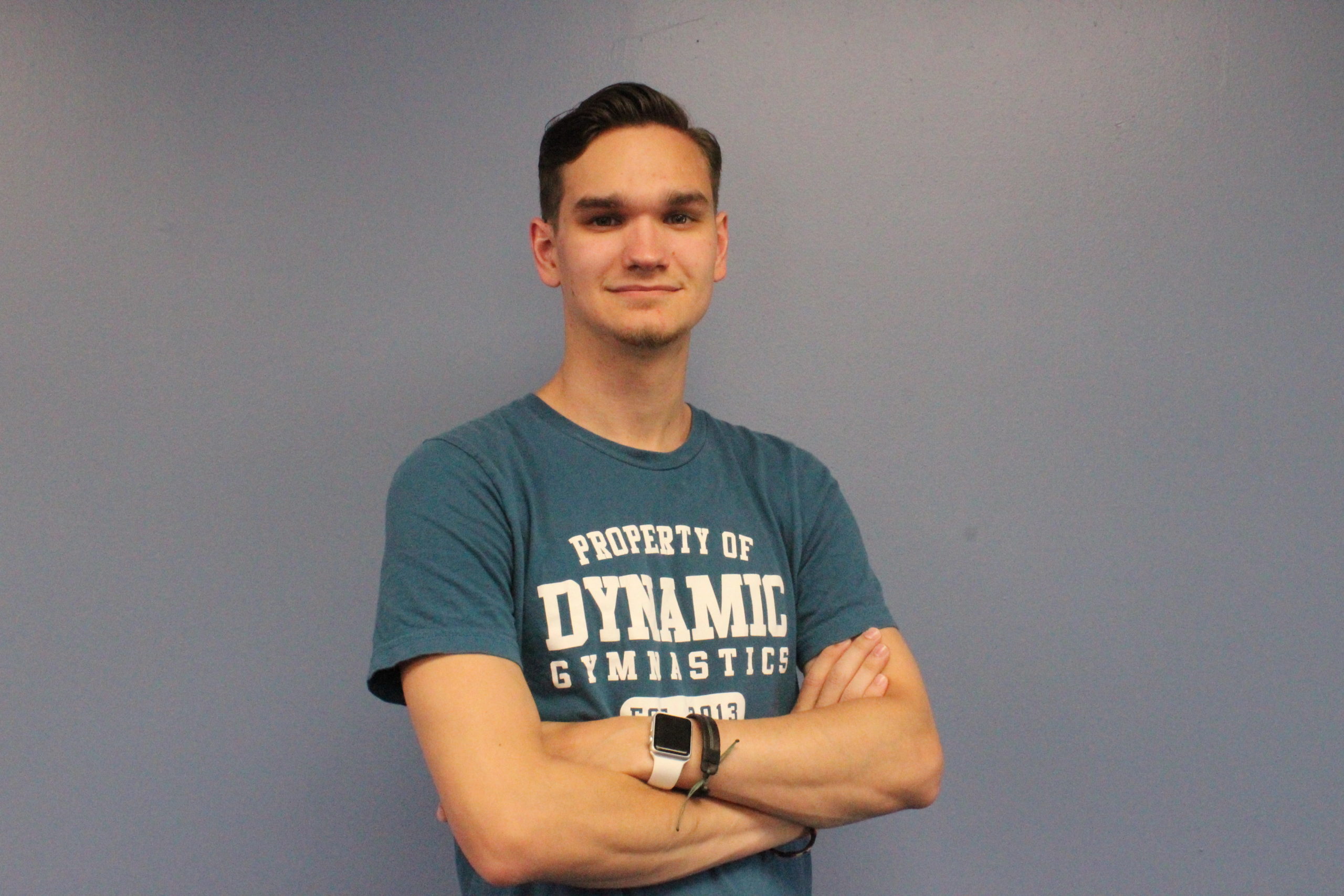 A little about Keane

Keane has been involved in the sport of T&T since he was 7 years old. He competed for 12 years, achieving the highest competitive level of Senior Elite on the Tumbling event as well as reaching Open Elite on the Double Mini. At the age of 15 he discovered a love and talent for coaching. Believing his time on the Tumbling team was invaluable in teaching him good work ethic and self-discipline, he desires to push his athletes to learn the same. Keane is 22 years old and is currently a senior in the Liberty University School of Music. 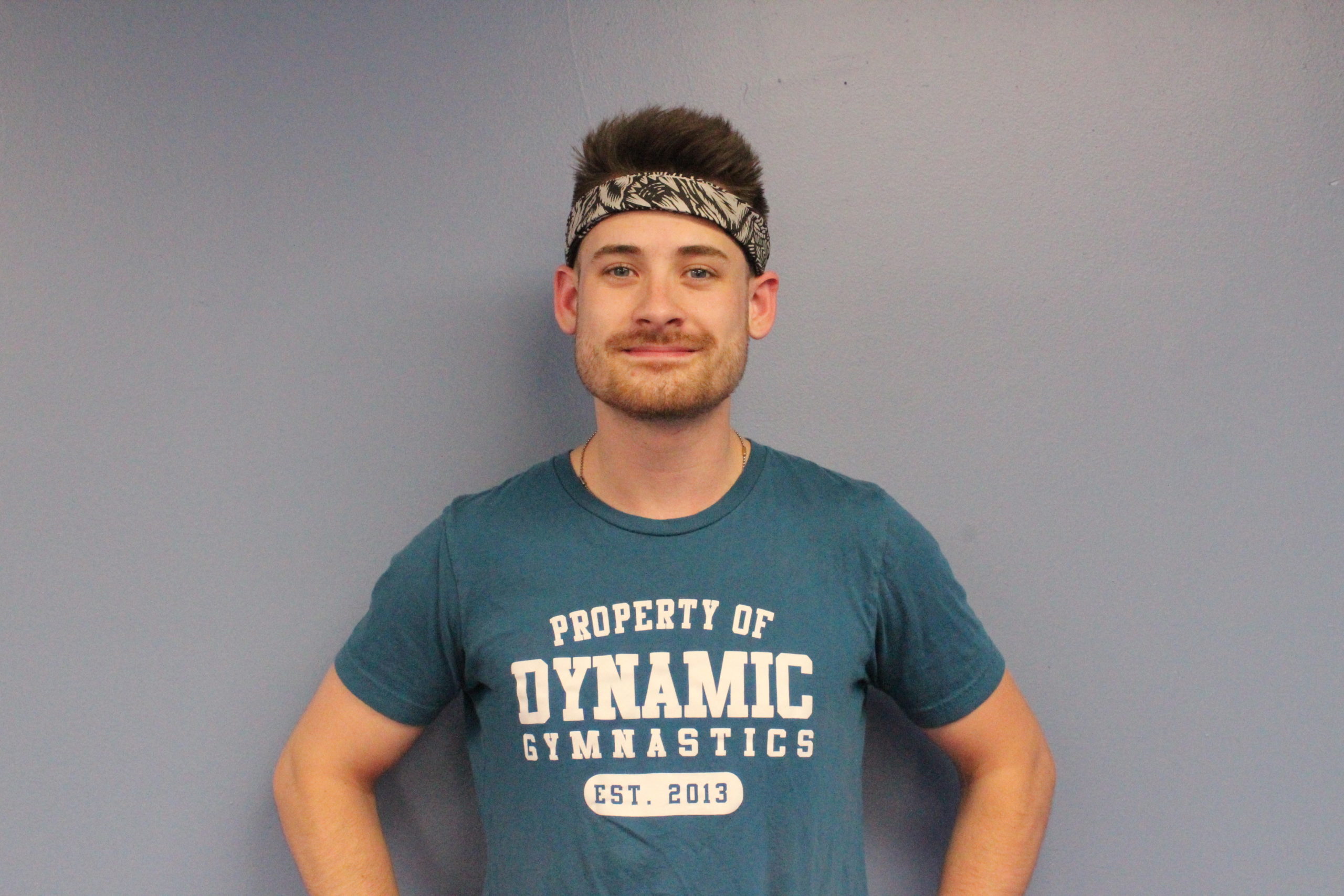 A little about Aaron

Aaron started Gymnastics at a very young age and would later try other sports before finding his way back to the gymnastics world. By the time he entered the sport again he soon discovered the difficulty on catching up to the team requirements, but that did not stop him. By the time Aaron graduated high school, he had over 8 years on a competitive level gymnastics team ending his high school career as a level 10 gymnast with one season of judging experience. During his early high school years, Aaron also started coaching pre-school classes as well as level 4-6 team boys at the local gym facility where he trained. During his last regional competition, Aaron placed 11th in the region on the rings, coming back from tearing a tendon in his shoulder that previous summer. Aaron also competed two years on Liberty University’s club gymnastics team and is currently a senior in the graphic design program. Aaron is USAG professional member and safety certified. 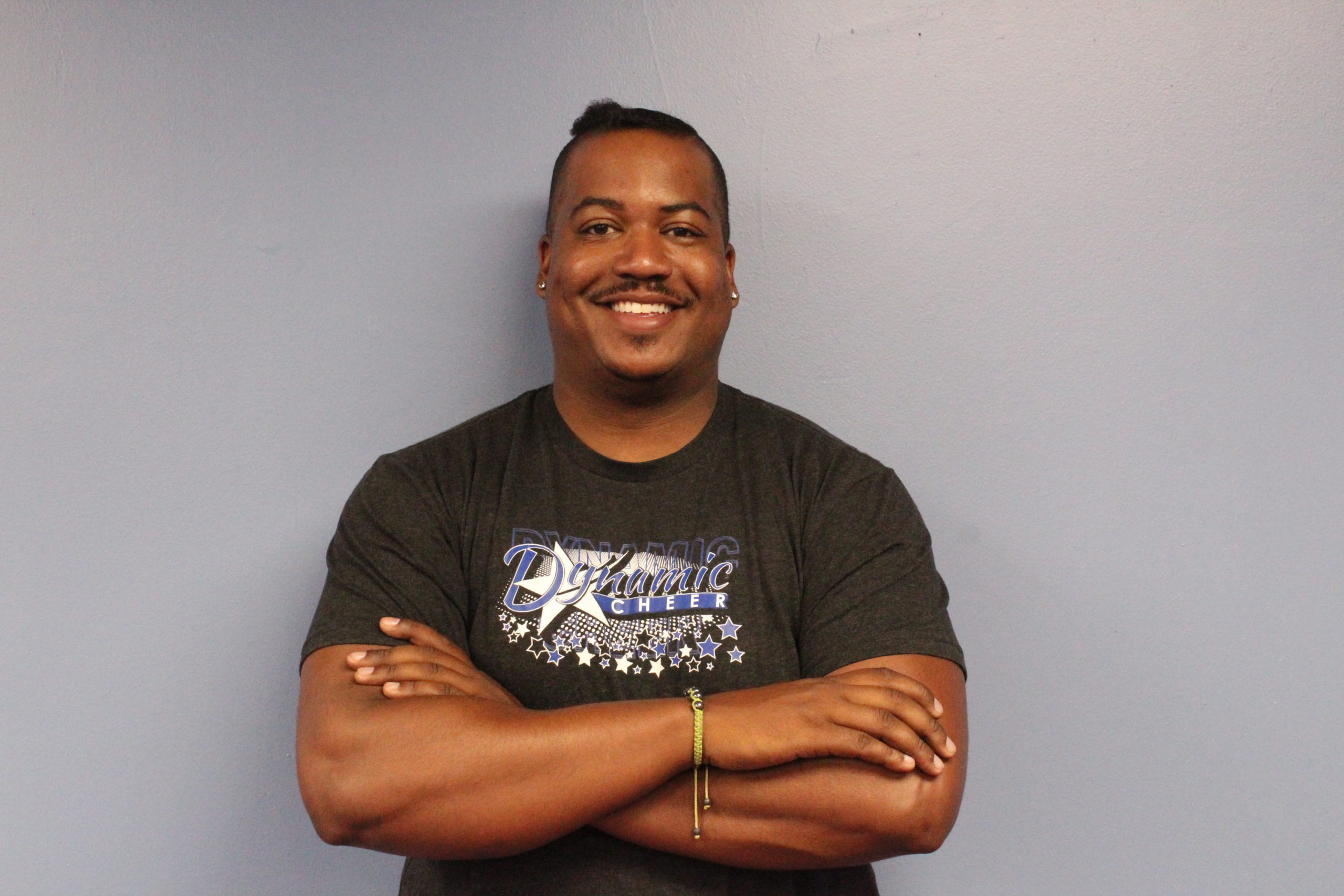 A little about Will

Will is no stranger to the area, or to the world of cheerleading. Will started his cheerleading journey right here on the outskirts of Lynchburg, in the town of Rustburg, where he competitively cheered for Rustburg High School winning District & Regional championships and placing at State. After high school, Will cheered at Bridgewater College participating on their co-ed football and basketball cheerleading teams. While at Bridgewater College, he started coaching at Turner Ashby High School in Harrisonburg, VA as assistant football and basketball cheerleading coach. Will even took on the role of becoming the competitive cheerleading coach at Turner Ashby, taking the “Knights” all the way to states for their first time in over 3 years.To continue his coaching experience, Will joined the Southern ChaRm Cheerleading Company, in Waynesboro VA, becoming a cheer, dance and tumbling coach to numerous teams and athletes winning countless awards. He also competed on Southern ChaRm’s Open Co-ed Level 5 All-Star team. Moving back to his home town of Rustburg after graduating, Will has been helping out with local high schools in the area, judging tryouts, hosting “Cheernastic” camps, and assisting in practices, all while working at Wells Fargo. He brings experience, professionalism, and a ton of enthusiasm to the Dynamic All-Star cheerleading coaching staff. 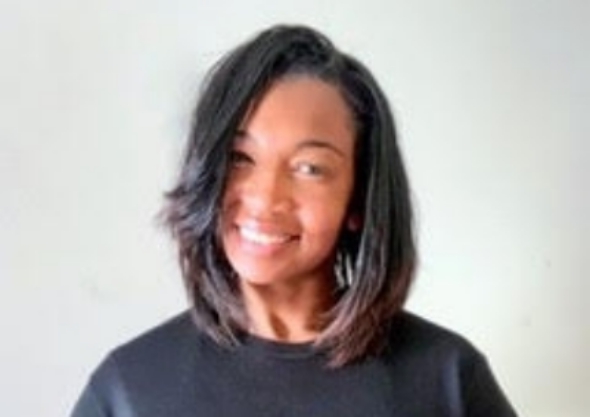 A little about Kena

Coach Kena is a mother of 4 from Voorhees, New Jersey. She went to Liberty University where she was a full scholarship track and field athlete. She has her Bachelors Degree in Special Education along with her Masters Degree in Marriage and Family Counseling. She has coached track and field for over 5 years at Brookville High School, Appomattox, and LCA.

Coach Kena is no stranger to cheerleading. She started cheering for sideline and competition cheer at the age of 9 until 16 years of age. In recent years, she has had the opportunity to be the Head Coach for the JV Timberlake Lions and the Sandusky Saints. Both teams have won first place in several competitions with choreography she created.

Along with coaching at Dynamic Cheer, Kena has her own in-home child care and plans on working on her PHD in Special Education. 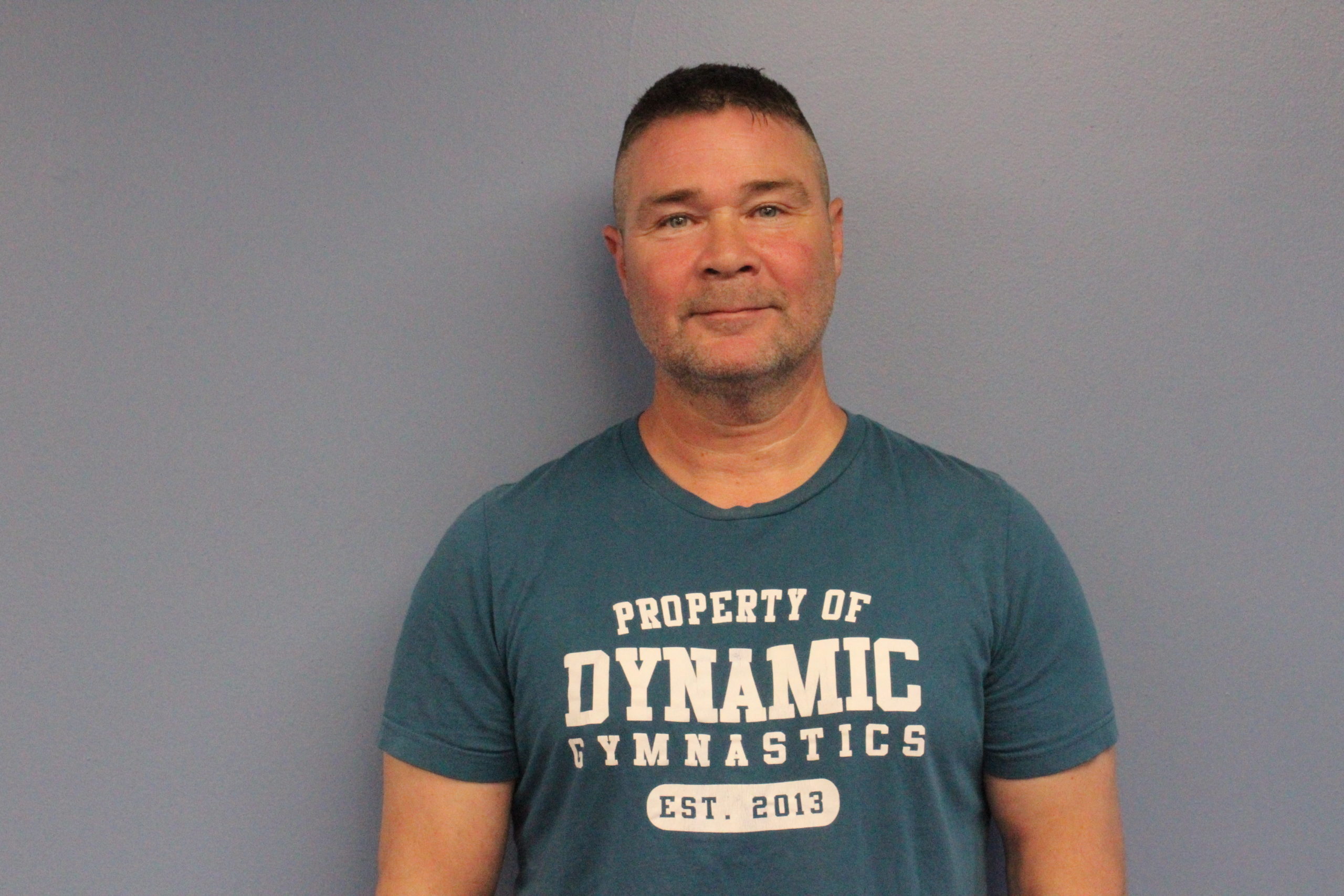 A little about Dennis

Dennis was a competitive gymnast in New Jersey for 6 years. While also student coaching he quickly fell in love with the challenge and satisfaction of assisting a student acquiring a new skill.

While serving in the United States Air Force Security Forces for 6 1⁄2 years, Dennis started a gymnastics competition circuit between the American Youths Association for all Air Force Bases in Germany. Upon exiting the USAF, he began coaching USAG girls competitive gymnastics and assisting in tumbling for various cheer teams. This led to a full time tumbling instructor position with World Cup All Stars in Freehold, NJ. In April of 2007, Dennis coached two teams to World Championship titles. In 2007, he started coaching at Stingray All Stars in Marietta, GA taking team Orange to 2 consecutive World Championship titles in 2008/2009.

Returning to Georgia in February of 2011, Dennis taught recreational tumbling, tumbling team, as well as numerous private tumbling lessons at Twister All Stars until 2020 when he moved to Lynchburg, VA.  Dennis also holds a passion for video production and has done numerous college try out videos, end of season banquet videos, special moments photography, and utilized drone video for special events.

A little about Alexia

Coach Alex joined the Dynamic coaching staff with 10 years of competitive cheerleading experience. A graduate of Rustburg High School, she participated in the dual enrollment program at CVCC where she is completing her required pre-requisites. She hopes to attend the University of Lynchburg and become a Certified Athletic Trainer. Alex also cheered for Rustburg HS and loved every aspect of cheering, especially being a flyer. She loves working with children and feels that gymnastics is not only fun but provides the perfect learning environment. Her cheerful disposition and eagerness to learn makes her a real asset to Dynamic! Alex is safety certified and a USAG instructor. 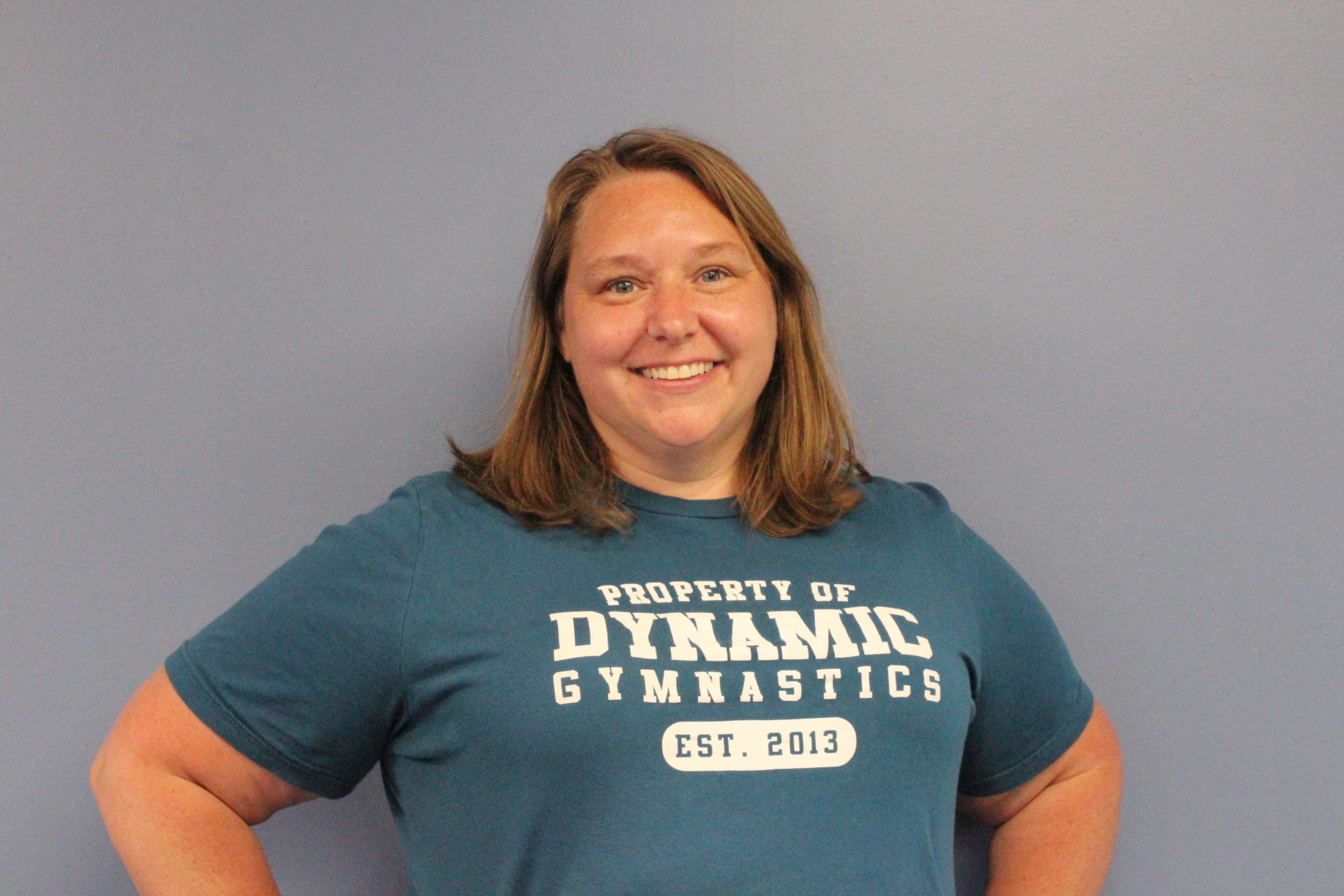 A little about Jessica

Jessy has been a part of the Dynamic family for three years. She loves working with children and is passionate about encouraging them to learn and grow. She is a home school Mom and Girl Scout leader, and her daughter, Natalie, is on the Xcel team here at Dynamic. Jessy is a Silver leader with Young Living and she is enthusiastic about sharing her love of natural living. With a background in customer service and clerical duties, we are blessed that she is a part of our gym team. 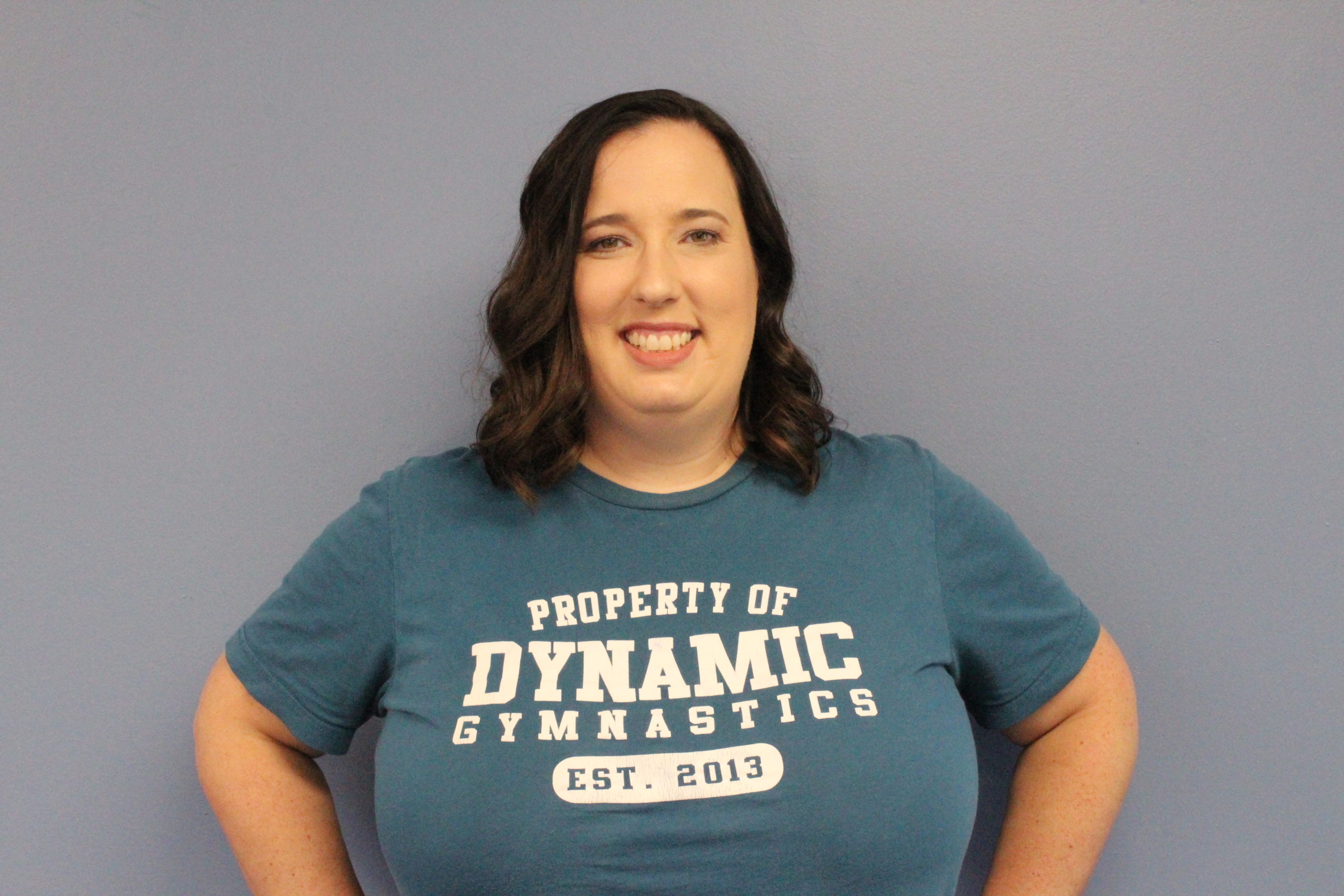 A little about Ashlee

Ashlee has been part of the Dynamic family for five years. She is mom to our very own Coach Maddie. Her daughter Kathryn is on our Optional Gymnastics Team. In addition to working at our front desk, she is also a homeschool mom. Before being promoted to stay-at-home mom, Ashlee spent over 7 years in an office setting at an architectural/engineering firm and also a real estate office. 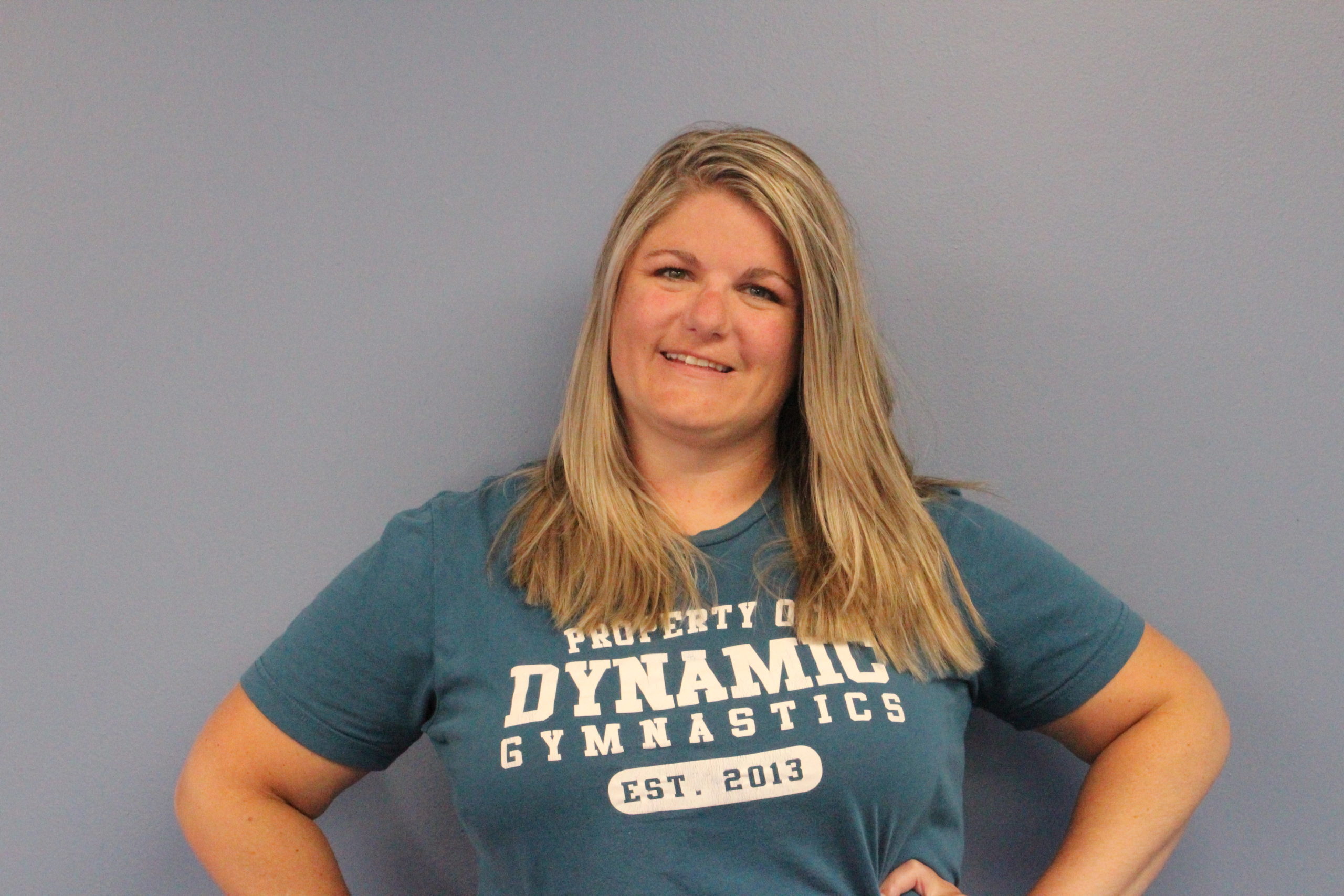 A little about Crystal

Crystal has three children that are Dynamic athletes. Emma is on our Xcel Competition Team. Riley and Eleanor are on our Dynamic Cheer Team. She joined the front desk staff earlier this year and comes with 12 years of office management experience in an educational setting. She has been volunteering as the Head Cheer Team Mom for 2 years; helping them organize, fund raise, and manage team events. Crystal is excited to be a part of our front desk staff.